Stage Two Construction continues at pace despite the plentiful rain. We are looking forward to beginning the roundabout and the buildings soon. South Greensboro St. will close in front of our site, for the construction of the roundabout, beginning June 11th, after school lets out, and is scheduled to reopen August 13th.

On Wednesday at 7:30 PM, we are hosting a public information meeting at the Carrboro Town Hall regarding the construction of the roundabout and the buildings.

Stage One of construction has begun. Stage Two is under review. 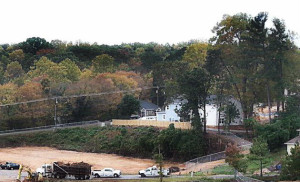 A Neighborhood Information Meeting was held at Town Hall in Carrboro on June 26th to discuss the plan and timeline for developing South Green.

The project is being developed in five stages. The five stages are listed below:

Stage one is demolition and grading. The site will be surrounded by chain link fencing. Gates will provide emergency vehicles uninterrupted access to Purple Leaf Place. (Emergency services will have keys to open these gates.) A detour will be posted to reroute pedestrian and bicycle traffic, as access from Rand Road to the multi-use path entrance at Purple Leaf Place will be closed.

During this stage a temporary detention basin will be built. A skimmer will drain the basin after stormwater events, as per state regulations. Once the skimmer basin is in place we will begin mass grading of the eastern slope.

We hope to begin stage one in the next few weeks. We estimate that demo will take two to three weeks and grading will take two to four weeks. The goal of the mass grading is to remove all dirt needed for future phases from the eastern slope and stabilize that bank immediately. The dirt removed will be stored in two large surcharge piles in the location of the future buildings. The surcharge piles are needed to prepare the earth below for the future building pads. The site will remain in this stage until stage 2 (below) is completed.

Stage two is the installation of a stormwater pipe under South Greensboro Street by NCDOT. This installation must happen before we can proceed to stage three. These plans are currently in the design process with NCDOT.

Stage three is the installation of our underground box culvert for stormwater management, which will connect to the NCDOT pipe installed in stage two. In this stage there will be additional grading, including filling in a portion, if not the entire temporary detention basin built in stage one.

Stage five is the installation of either three or four buildings on the site.

Thanks for your interest. Please check back regularly for updates on the project.

We are pleased to provide construction updates to all interested parties as we develop South Green.